The self-belief and confidence from within ensured Josh Schuster was ready to perform as a makeshift half in Friday night’s win over St George-Illawarra Dragons.

Schuster was named in the second-row for his first match back from a calf injury since the round 11 win over Parramatta, but a late withdrawal by half-back and captain Daly Cherry-Evans saw things change quickly.

Cherry-Evans and full-back Tom Trbojevic were rested after playing in the final Origin match last Wednesday.

“I definitely enjoyed it. I love playing both positions but for me at the moment, it’s about getting the opportunity to play first grade which I am very grateful for,’’ Schuster told ABC Sport.

“Before we got on the bus, Des pulled me aside and told me that ‘Cherry’ was not playing, so I had to fill in that slot. I was very happy.

“I didn’t get any time during the week to train in the halves. I do watch them a lot, Cherry and Foz (Kieran Foran), just in case something happens, so it wasn’t a very big change for me.”

The talented playmaker turned in a man-of-the-match performance, including some no look passes to his team-mates, something which comes naturally to him.

“I have been doing that since I was a young kid, just going to the park every day with my Dad and brothers,’’ Schuster said.

“Just going to the park with a football, kicking it around and learning new skills. It’s just a good habit of mine.”

Schuster added the 32-18 win over the Dragons would also help convince people that the Sea Eagles can win without brilliant full-back Tom Trbojevic in the side.

“It means a lot. They are superstar players,’’ Schuster said.

“There has been a lot of talk that we couldn’t win without them but to get the win like that shows we can do it.

“Having Tom back and Cherry-Evans will be a massive asset for our team.”

Schuster also joked that Hasler was keeping a close eye on the players in the team’s hub on the Sunshine Coast.

“I think I’ve seen him at 3am walking around looking in our windows to see if we’re awake…he’s a bit of a freak,’’ said a laughing Schuster.

“I’ll definitely be locking my windows.” 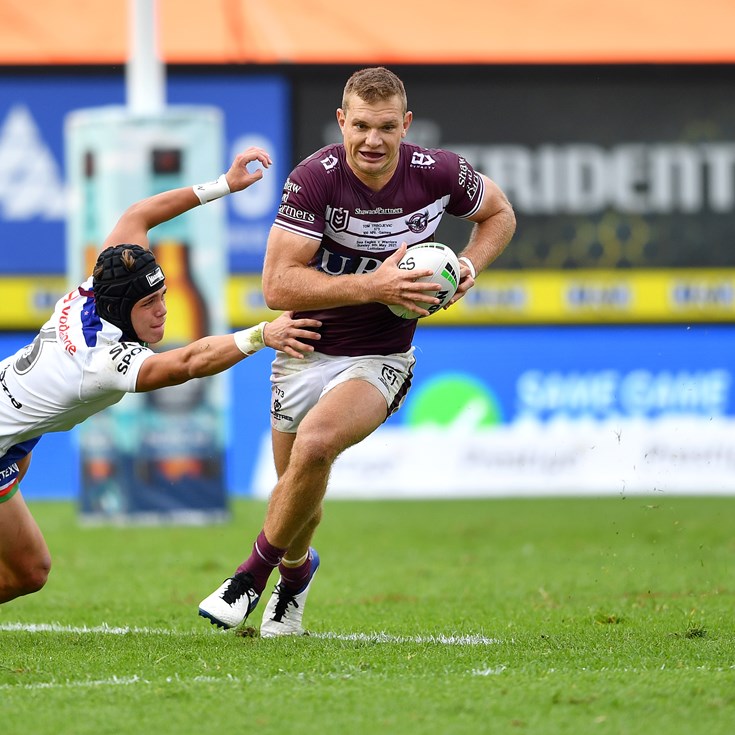