We take a look at all the stats from our Rd 25 win over the Cowboys and see how the players finished the regular season on the NRL stats tables.

It was a try party for the boys in maroon and white as they ran rampant to score eight tries, with five of them coming from a Trbojevic.

Jake had two to his name to take him to three tries for the season while Tom bagged himself a hat-trick, his fifth of the season.

Jason Saab, Reuben Garrick and Daly Cherry-Evans all scored a try each.

Tom Trbojevic ultimately edged out Saab for the club’s top scorer for the regular season with 25 tries in 15 games. Saab finished on 23 tries in 24 games and Garrick 21 tries in 24 matches.

All three finished inside the NRL’s top five tryscorers list headed by Alex Johnston from the Rabbitohs who claimed the crown with 27 tries.

Between them, Trbojevic, Saab and Garrick scored 69 tries in 63 games.

The Sea Eagles are the only club to have had three players score 20 or more tries in a season.

Garrick finished with 18 points for the match through a try and 7/8 goals to finish his regular season tally on 304 points (21 tries and 110 goals).

It saw him claim the top of the podium for points scored in the NRL this season with a comfortable gap to Souths half-back Adam Reynolds on 248 points.

The 110 goals kicked in the season also sees Garrick finish in second place for the season, just shy of Reynolds’ total of 112.

Garrick also broke Hazem El Masri’s record of 288 points in a season set in 2004. He also became the first player to score more than 300 points in a regular season before playing a starring role in Manly's try of the year on full-time.

Tom Trbojevic led the way with a stunning 302 metres made from 26 runs, almost 100 metres ahead of Garrick who had an impressive 201 metres from 13 runs.

Centres Morgan Harper (149 metres from 18 runs) and Brad Parker (104 from 12) were notable in the backline’s big metre haul.

Other notable efforts include Daly Cherry-Evans (167 metres from 23 runs) and Dylan Walker (143 metres from 14 runs).

Two Sea Eagles players finished in the top five in the NRL for try assists throughout the season.

Cherry-Evans raked in three try assists to bring his total for the season to 25, leaving him in third place.

Two assists ahead off him in second place was Tom Trbojevic (27), who managed to set up two tries against the Cowboys.

Olakau’atu also managed to set up one of the tries.

‘Turbo’ also managed to lead two other categories against the Cowboys, registering six line breaks and a whopping 19 tackle breaks. He was one of five players to break the line and one of the 13 that managed to break a tackle.

Despite being behind on the night, Garrick still led the NRL competition, finishing with 36 for the season, one ahead of Johnston (35) and six ahead of Tom Trbojevic.

In tackle breaks, Garrick was the closest player to ‘Turbo, breaking eight tackles. The same players as earlier followed, with Olakauátu breaking six followed by Cherry-Evans and Walker on five.

Tom Trbojevic was one shy of finishing in the NRL top five, finishing the regular season with 105 tackles in just 15 games.

As seen in recent weeks due to the possession swaying heavily in favour of the Sea Eagles, the team wasn’t required to defend as much, only making eight more tackles compared to last week’s win over the Bulldogs.

Despite this, Manly still finished with a higher effective tackle percentage of 90.1% and 272 tackles compared to the Cowboys’ 81.2% and 342 tackles made.

The Cowboys also had more than double of missed tackles as the Sea Eagles only missed 22 compared to their 57.

Hooker Lachlan Croker and Jake Trbojevic each finished with 35 tackles, only three short of leading the match. Schuster completed 33 tackles to join the other 10 players that hit double digits.

Croker finished the regular season in sixth place on the NRL ladder for most tackles with 908, three three behind Reece Robson from the Cowboys.

Cherry-Evans was phenomenal as usual with boot to ball, kicking for 565 metres from 17 kicks, out-kicking both of the other halves metres combined (422 metres from 15 kicks).

The halfback was pipped of top spot by Panthers halfback Nathan Cleary, who had a total of 8334 metres kicked for the season, compared to Cherry-Evans’ 8270 metres. 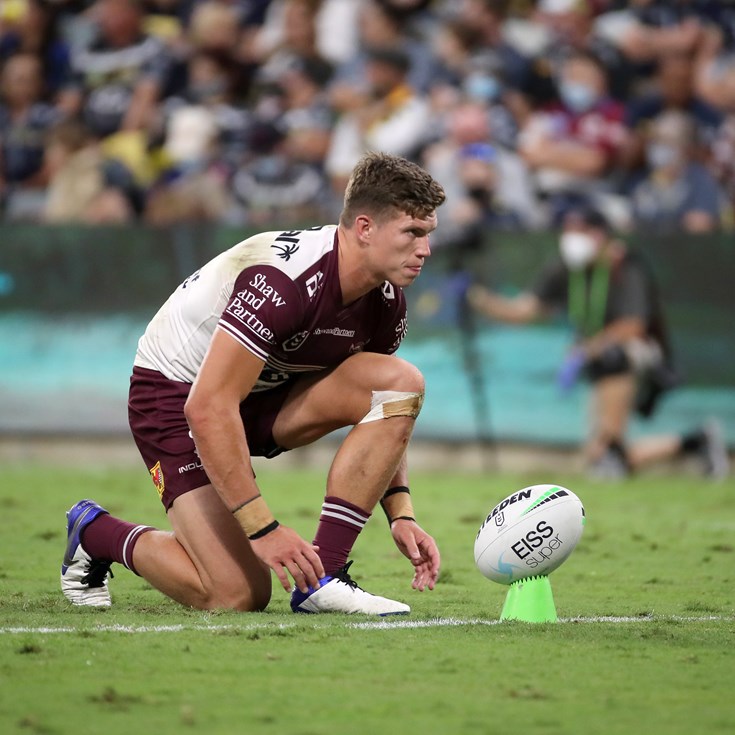