Manly Warringah Sea Eagles suffered a 46-6 loss to competition leaders Penrith Panthers at Lottoland tonight in round four of the Telstra Premiership.

Prior to kick-off, Coach Des Hasler promoted Morgan Boyle from the bench to start in the second-row for Jack Gosiewski.

In front of a crowd of 6076, the Sea Eagles showed promising signs in the opening two defensive sets, putting on some good shots to stop the Panthers’ big men.

It was the Panthers though who opened the scoring when winger Brian To’o wrestled past two defenders to reach over to score in the third minute. Half-back Nathan Cleary missed the conversion for a 4-0 scoreline.

Penrith prop Moses Leota found the line in the 10th minute, showing good support play to run off a flick pass from fellow prop James Fisher-Harris. Cleary converted from in front to extend the scoreline to 10-0.

Manly were unfortunate not to grab their first points, with the side showing determination to retain the ball in Penrith’s territory after forcing an error, only for a pass from full-back Dylan Walker to go into touch.

Second-rower Viliame Kikau then regathered a deflected Jarome Luai grubber inside the Sea Eagles’ ten metre line, and spun out of the defenders’ reach to score his side's third try six minutes after their last. Cleary converted for a 16-0 lead.

To’o grabbed a double in the 23rd minute, gathering a dropped Matt Burton pass before breaking past Walker and forward Morgan Boyle to crash over. Cleary slotted the conversion from the sideline to make the score 22-0.

Another set of six in Penrith’s territory after a dropped kick saw Manly on the attack. They were unable to grab a try, but five-eighth Kieran Foran showed his experience to put a smart grubber kick through and force a repeat set.

From there, replacement hooker Cade Cust grabbed his side's first try of the match, as forward Sean Keppie managed to get his arm free and offload the ball, despite having three defenders on him.

Cust ducked and weaved around a handful of Penrith players before diving over in the 31st minute for a brilliant try. Winger Reuben Garrick converted for a 22-6 scoreline.

The Sea Eagles continued on in attack, travelling downfield with another set of six thanks to a penalty. Keppie, who played a big part in the last try, bumped past Kikau and nearly scored, only to be held back short of the line before the ball was forced out of his hands.

With minutes to play in the first half, Manly captain Daly Cherry-Evans kicked his first 40/20 for the season to thrust his side into attacking position. Despite this, they were unfortunate not to score again, with Saab being outjumped in a crossfield kick with Penrith taking a 22-6 lead into half-time.

Kikau grabbed his second try seven minutes into the second half, linking up with Jarome Luai before racing down the left edge with a powerful run. Manly forward Morgan Boyle was forced off the field with a right arm injury. Cleary missed the conversion to take the score to 26-6.

Manly had high possession of the ball over a five-minute period, gaining repeat sets off a smart kick by Foran in-goal and three penalties.  A successful Captain’s Challenge saw the Sea Eagles get another penalty for their fourth set at the line, only to be stopped by Kikau who forced an error. Penrith hooker Mitch Kenny was placed on report for a crusher tackle as Manly were looking for their second try.

Penrith centre Matt Burton crashed over on the left edge in the 62nd minute after Cherry-Evans deflected a pass. Luai regathered the ball before handing it off to the centre. Cleary converted the try for a 32-6 lead.

Five minutes later, back-rower Kurt Capewell scored, coming off the back of a break in play from Cleary. The halfback grubber kicked through before regathering and putting a chip over that sat up for Capewell. Cleary converted to extend the lead to 38-6.

The Panthers then made a break down the right edge before centre Paul Momirovski reached out to score. Cleary converted for a 44-6 lead.

Cleary converted a penalty goal after the siren for the 46-6 scoreline.

The winless Sea Eagles now travel to Gosford next Friday to play the Warriors at 6pm. 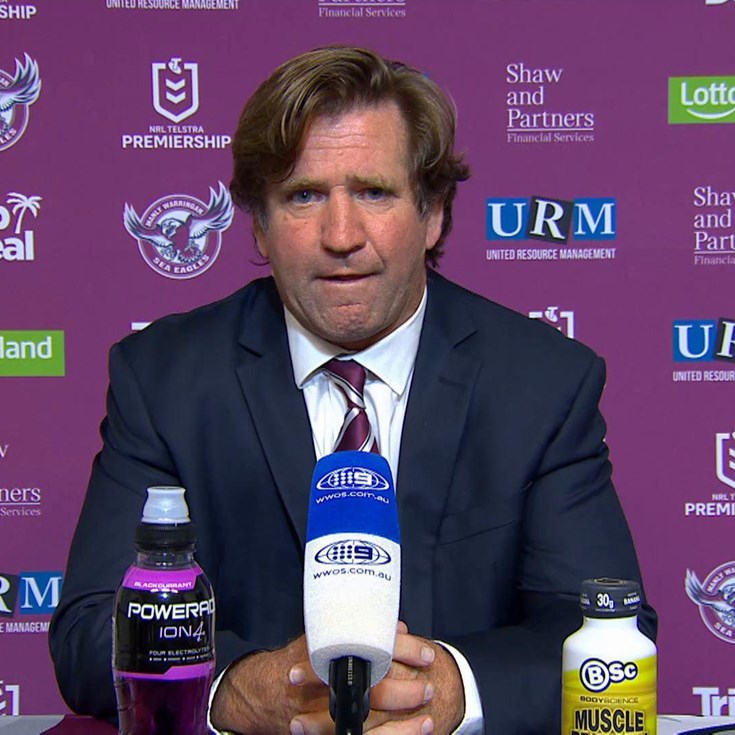