Manly Warringah Sea Eagles almost pulled off a miraculously comeback in going down 19-16 to the Parramatta Eels at Bankwest Stadium tonight in round four of the NRL Telstra Premiership.

With less than a minute remaining, the Sea Eagles were denied a try to Reuben Garrick on a forward pass call that would have won them the game. Following the match, the NRL admitted the call from the touch judge was wrong.

The Sea Eagles did well to soak up some early pressure on their line in the opening five minutes with the first points coming from a penalty goal to Eels half-back Mitchell Moses for a 2-0 lead after 16 minutes.

Manly winger Reuben Garrick got the Sea Eagles level at 2-all with a penalty goal in the 20th minute after a high shot from centre Waqa Blake on hooker Danny Levi.

The Eels took a 6-2 lead in the 30th minute after centre Michael Jennings crossed from a pass by winger Maika Sivo. Moses converted for an 8-2 lead.

Parramatta then took advantage of a Manly error to score their second try in the corner to Dylan Brown with 12 seconds left before half-time. Moses failed to convert for a 12-2 scoreline at the break.

The Sea Eagles started the second half poorly when Levi dropped a pass from prop Sean Keppie in front of their tryline. The Eels punished the Sea Eagles for it when Kane Evans planted the ball down on the line for a try in the 40th minute. Moses converted for an 18-2 lead.

Three minutes later, Manly hit back well when full-back Tom Trbojevic sent winger Jorge Taufua over for a try. Garrick failed to convert the try for an 18-6 scoreline after 44 minutes.

Manly five-eighth Dylan Walker then took on the line to beat two defenders to score next to the posts. Garrick converted to leave the Sea Eagles trailing 18-12 after 52 minutes.

The Eels were denied a try to Oregon Kaufusi in the 62nd minute after it was ruled he failed to ground the ball in-goal cleanly from a grubber kick on the last.

Moses gave the Eels a seven point buffer in the 73rd minute when he landed a field goal for a 19-12 lead.

Taufua got the Sea Eagles back to 19-16 when Taufua grabbed his second try in the corner with three minutes remaining. Garrick failed to convert the try.

The Sea Eagles were denied a try inside the final minute to Garrick on a forward pass call.

The loss leaves the Sea Eagles with two wins from the first four rounds ahead of next Thursday night's home match against the Brisbane Broncos at Central Coast Stadium. 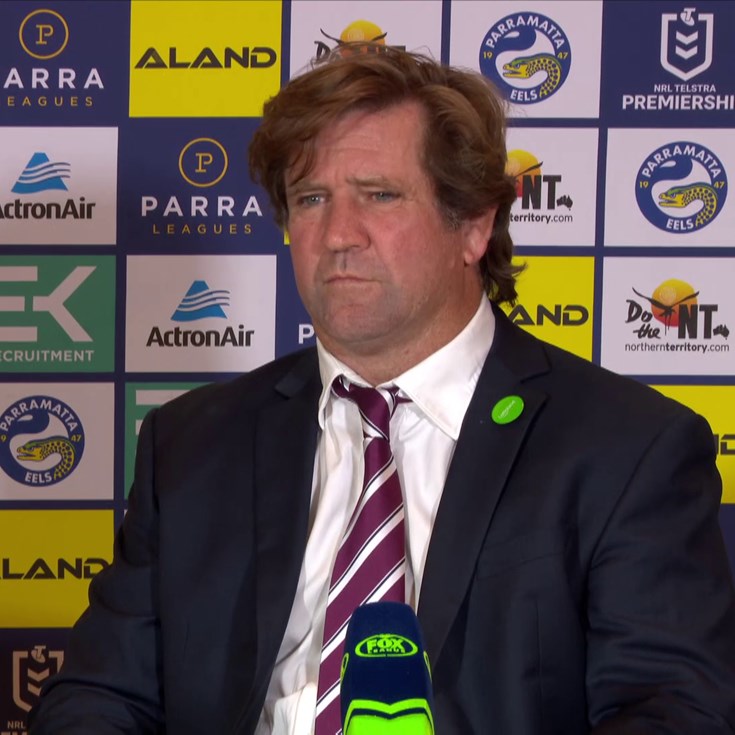