The Round 21 match was certainly an entertaining battle with the Sea Eagles pushing the premiers hard after trailing 8-0 early.

The Sea Eagles got back to be locked at 8-all at half-time but a series of crucial errors throughout the game at key stages proved costly in the end in a finals intensity match.

An early break in play from centre Brad Parker off the back of a silky Tom Trbojevic pass invited the Sea Eagles into the enemy’s territory in the third minute.

Storm second-rower Kenneath Bromwich slid across the dewy ground underneath defenders to score five minutes later. Fullback Nicho Hynes failed to convert from the sideline for a 4-0 scoreline.

Manly prop Toafofoa Sipley was penalised and placed on report 15 metres out from his own line for a crusher tackle. Hynes converted the penalty goal for a 6-0 lead after 12 minutes.

The Storm went close to adding more points on the board minutes later with centre Justin Olam running hard at the corner, only to be pushed out by centre Morgan Harper.

Struggling for possession with just over twenty minutes played, Manly had to roll their sleeves. Captain Daly Cherry-Evans, one of two remaining players from the memorable 'Battle of Brookvale” side from 10 years ago, attempted to give his side the advantage through a 40/20 but fell just short.

Melbourne were forced into some scramble defence as Sea Eagles winger Reuben Garrick broke down the sideline 20 metres out from the line after a quick catch-and-pass from Trbojevic. Despite his efforts, the winger was taken over the sideline by three desperate defenders.

The slippery conditions proved to be too much to handle for some of the players, with winger Jason Saab slipping whilst regathering the ball, being forced to ground the ball in-goal. The drop-out that followed didn’t make the ten metres, leading to another penalty goal attempt in the 29th minute. Hynes converted to add another two points, taking it to 8-0.

With five minutes left before half-time, Manly struck with a stunning long-range try from Saab. The pacey winger leapt into the air to take an intercept before putting on the afterburners to score his 19th try of the season. Garrick converted from close range for an 8-6 scoreline.

Garrick then nailed a 30 metre penalty goal to level the scores at 8-all at the break.

The Sea Eagles drew first blood in the second half when Garrick dived over for a try in the 43rd minute.

Trbojevic was big in the build-up, taking another quick catch and handing the ball off almost immediately to the winger who ran some strong lines to beat the defenders. Garrick converted his own try from the sideline for a 14-8 scoreline. Moments prior to the try, prop Taniela Paseka went down with a foot injury and was unfortunately forced from the field.

In their next set with the ball, Melbourne replied with a try of their own when Olam went over untouched off a Harry Grant pass from the ruck. Fullback Ryan Papenhuyzen converted from in front to make the scores level again at 14-all.

Olam grounded the ball in the 54th minute for his second try after a bobble in-goal from the Sea Eagles. Papenhuyzen made the conversion from next to the posts for a 20-14 lead.

Manly forced an error inside Melbourne’s half and were given a penalty off the back of the scrum. Trbojevic combined with Garrick, who pushed past two defenders to dive over in spectacular fashion for a try. He failed to convert his own try for a 20-18 scoreline.

Melbourne half-back Jahrome Hughes broke through the defence in the 68th minute and put through a grubber kick which was bobbled on the line by Manly for  Munster to score. Papenhuyzen converted for a 26-18 lead.

The Storm then landed a penalty goal late in the gamer for the 28-18 win.

The loss leaves the Sea Eagles in sixth place and two points behind the Parramatta Eels (fourth) and Sydney Roosters (fifth). 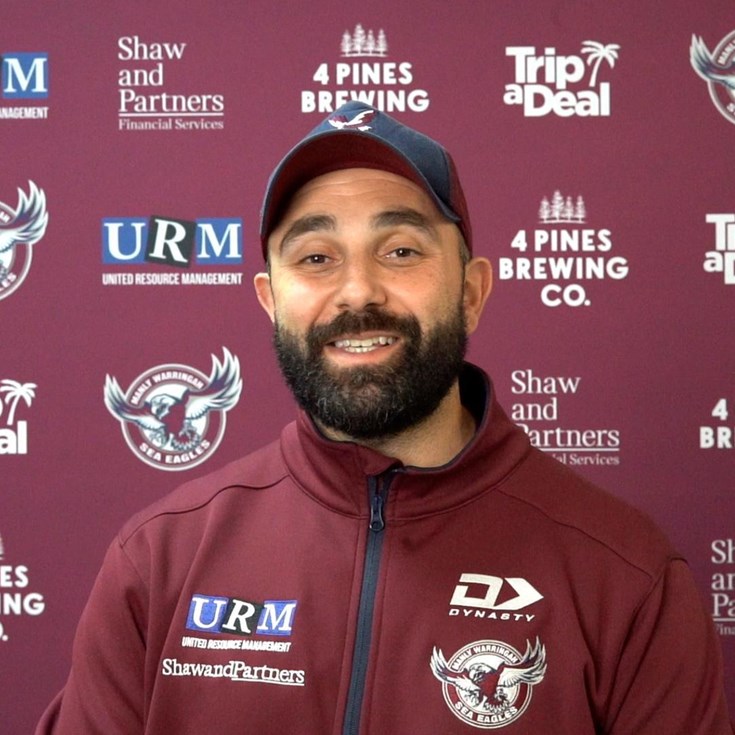