Manly Warringah Sea Eagles ended a three game losing streak tonight with a 22-18 win over competition leaders Parramatta Eels in round 10 of the Telstra Premiership.

In front of a crowd of 2021 of Manly ticketed Members at Lottoland, the Sea Eagles returned to their great attacking play following a disappointing loss to the St George-Illawarra Dragons last round, piling on three tries in the opening 16 minutes for a 16-0 lead.

The Sea Eagles were also very committed in defence, often frustrating the Eels into errors as the game wore on.

It was Manly's first win of the season at Lottoland following losses to the Melbourne Storm and Newcastle Knights.

Prop Martin Taupau celebrated his 100th game for the Sea Eagles by scoring the opening try in the second minute after crashing his way through the defence. Winger Reuben Garrick converted for a 6-0 lead.

The Sea Eagles went to a 10-0 lead when captain Daly Cherry-Evans crossed out wide in the 14th minute. Garrick converted for a 12-0 lead.

Sea Eagles hooker Danny Levi – after earlier being denied a try under the posts – then snuck over from a dummy half run to make it 16-0.

The Eels hit back in the 31st minute when centre Michael Jennings dived over in the corner. Full-back Clint Gutherson failed to convert the try for a 16-4 scoreline.

A smart grubber behind the line by Cherry-Evans saw second-rower Joel Thompson plant his hands on the ball to score in the 39th minute. Garrick converted from the sideline to give the Sea Eagles a 22-4 lead at half-time.

The Eels opened the scoring in the second half when centre Waqa Blake raced 90 metres to score after the bunker ruled Taupau lost the ball in a tackle, rather than a strip from Blake. Gutherson failed to convert the try for a 22-8 scoreline with 24 minutes remaining.

Parramatta prop Reagan Campbel-Gillard then fumbled the ball over the line from a grubber kick in the 69th minute before Jennings grabbed his second try. Gutherson converted the try for a 22-14 scoreline with eight minutes remaining.

The Eels then scored a late to winger George Jennings for the 22-18 scoreline.

The Sea Eagles dug deep again in defence in the final minutes to record their fifth victory of the season to sit just outside the top eight. 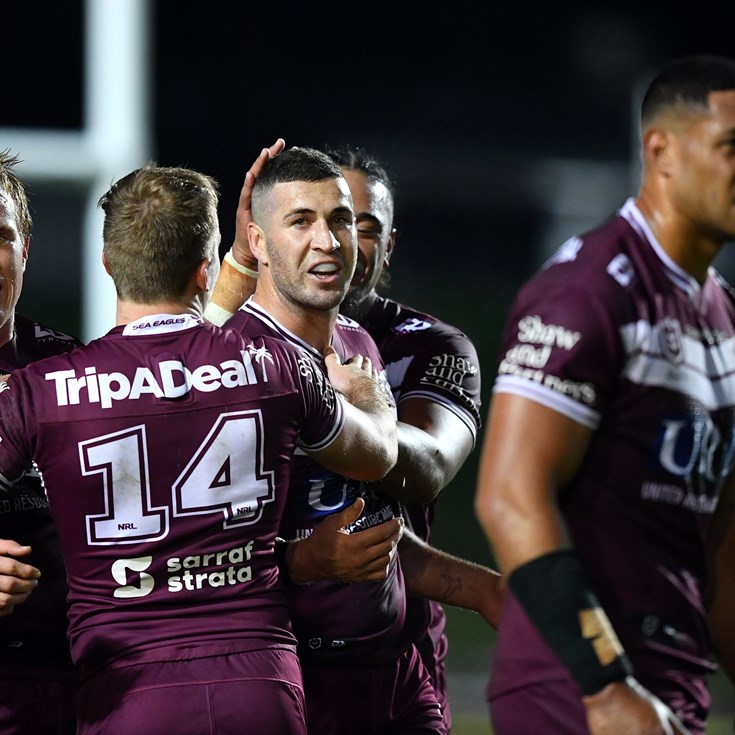