Manly's Cade Cust and Reuben Garrick are enjoying the ride of their lives in their maiden NRL seasons.

But for Cust there's another element in his elevation to first grade. He is playing with someone he watched carefully and admired as a teenager: Daly Cherry-Evans.

"I'm lucky. I get to learn off someone like Daly," he told NRL.com as DCE is reunited with his Sea Eagles teammates - the impressive 18-point win over the  Titans on the Gold Coast on Saturday, their third game together.

"In the 2013 grand final [v Roosters] I went into the sheds and got a photo with him. So I've been a big fan for while.

"Now that I'm playing with him it's a dream because he's got so much control out there, he makes other players around him, like me, play better."

Garrick feels the same way about his journey from overlooked Dragon to regular Sea Eagle, when it comes to playing in the NRL.

"I can't believe it actually. It's still surreal," said Garrick, who joined the Sea Eagles from St George Illawarra in the off-season.

"I guess I have to take it back to my support base – my mum and my family – for their continual faith in me and encouraging me to set new goals and go for them.

"They also keep me on track and never let me get too far ahead of myself."

Garrick has been a surprise packet for Sea Eagles fans. He's also now a firm favourite with the Lottoland hill after his 38 tackle busts and six line-breaks.

"Des [Hasler] has told me 'Don't get distracted by it all. Just keep your head down' and that helps a lot too."

Cust has also received plenty of the Hasler encouragement talks and he treasures those as well.

"Being a young half he said he still expects me to bark orders and organise and tell people where to go," he said. "If I see something Des expects me to take it and he’ll back me."

As for making his NRL debut, Cust is like any young footballer with that same dream.

"And to do it with the club I've come through [juniors] with just means so much more to me," Cust said.

He's already had two halves partners in Elgey and more recently Cherry-Evans. The Scone-born halfback got his start due to DCE's long-term ankle injury suffered in round seven against the Raiders.

The physical side of the NRL and the speed of every game is a step up from playing for Blacktown Workers in Canterbury Cup.

"But I expected that because you're playing with better players so everything is faster and slicker. Jumping up to that class is only going to improve my game."

Working alongside forwards like Jake Trbojevic, Curtis Sironen, Joel Thompson and international props Martin Taupau and Addin Fonua-Blake can only help as well.

All five players made over 115 metres against the Titans. Thompson made 69 post-contact metres, proving the most difficult Sea Eagle to pull down.

Sironen wasn't far behind him and made three line breaks alongside his three tackle busts and two tries - in his 100th NRL game. 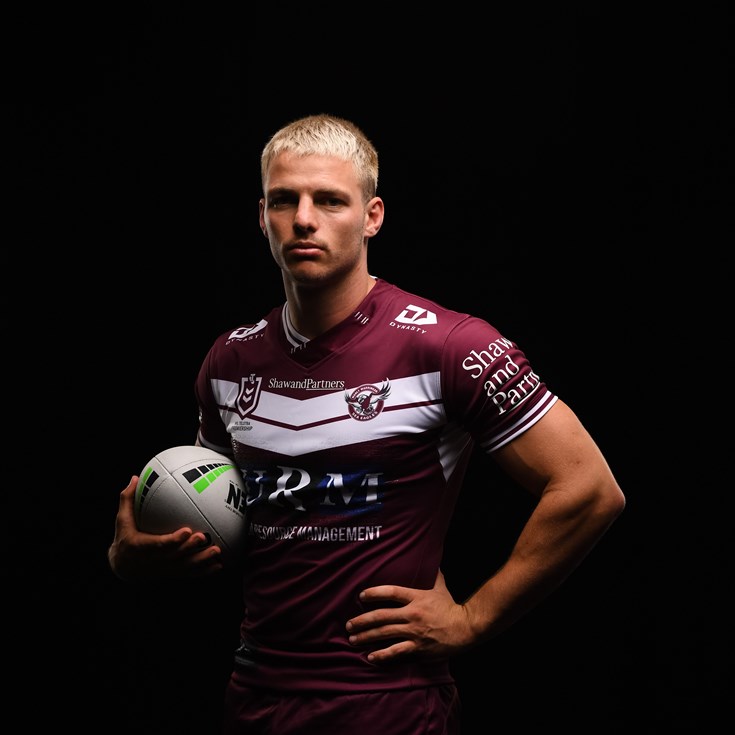 Cherry-Evans confident of playing 'late into my 30s'