Manly Warringah Sea Eagles suffered a 32-8 loss to St George-Illawarra Dragons at WIN Stadium tonight in round 15 of the Telstra Premiership.

In front of a crowd of 13,069, the Sea Eagles put up a strong challenge in the first half to trail by eight at half-time before the home side pulled away in the second half.

The loss leaves Manly with four wins for the season with nine matches of the regular season remaining. The Dragons sit on top of the premiership ladder.

The Dragons opened the scoring with a penalty goal to five-eighth Gareth Widdop for a 2-0 lead.

The Sea Eagles were denied a try in the 10th minute to second-rower Joel Thompson after he was held up in a tackle by full-back Matt Dufty.

Manly five-eighth Trent Hodkinson kicked a penalty goal in the 21st minute from 20 metres out for a 2-all scoreline before Dufty crossed for the Dragons' first try in the right corner five minutes later for a 6-2 lead.

The Dragons went to a 10-2 lead when centre Tim Lafai stepped past Brad Parker from dummy half to score out wide in the 31st minute. Widdop failed to convert the try

Manly got back to 10-8 in the 34th minute when Tom Wright produced some brilliant footwork and speed to slice through a gap to step inside Dufty to score. Hodkinson converted the try.

The Dragons took a 16-8 lead into half-time when second-rower Tariq Sims crossed in the 38th minute near the posts. Widdop converted the try.

St George-Illawarra extended their lead to 22-8 when Widdop converted his own try scored from a Ben Hunt grubber kick in the 46th minute.

Dragons prop James Graham scored his first try of the season when he got the ball down next to the posts for a 28-8 lead in the 56th minute.

The home side went to a 32-8 lead in the 73rd minute when winger Nene Macdonald scored from a crossfield kick that Manly failed to gather in.

The Sea Eagles have a week off next weekend due to representative round before tackling Penrith Panthers at Panthers Stadium on Saturday, July 30, at 3pm. 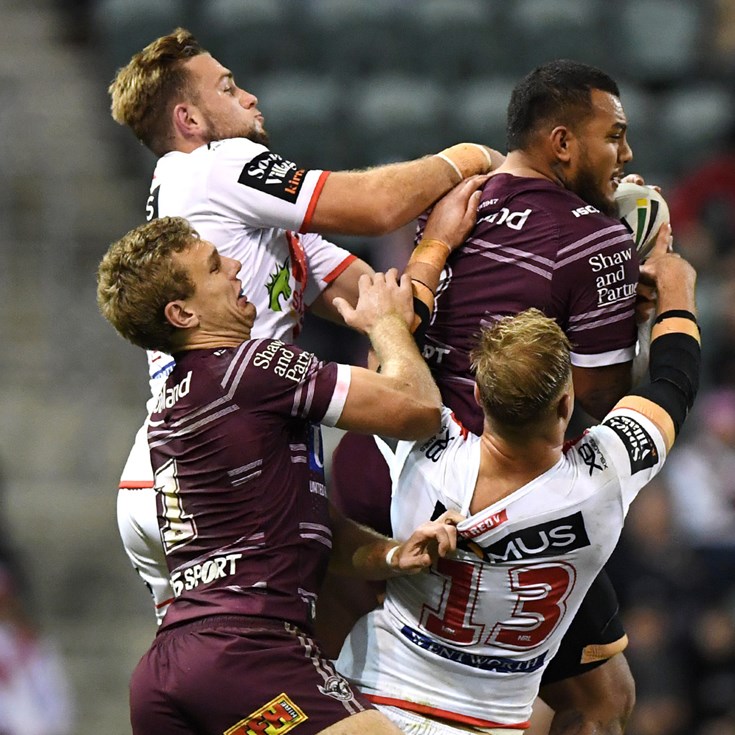