Manly Warringah Sea Eagles suffered a loss to the Warriors at AMI Stadium, Christchurch, tonight in round 14 of the Telstra Premiership.

In front of a crowd of 17,357, the match was a historic occasion for the Sea Eagles with Manly playing a home game for the first time in New Zealand's South Island.

The teams were playing for the Broadhurst Shelford Trophy named after Mark Broadhurst and the late Adrian Shelford, two former Manly players who did so much for rugby league in Christchurch.

The Sea Eagles opened the scoring in the fifth minute when hooker Api Koroisau burrowed over from dummy half next to the posts. Five-eighth Trent Hodkinson converted for a 6-0 lead after six minutes.

The Warriors were denied a try to centre Gerard Beale when Brian Kelly and Akuila Uate combined to take him over the sideline just short of the line.

Manly then lost Koroisau with a foot injury in the 14th minute before the Warriors were denied a try on a forward pass call from referee Chris Sutton.

Hodkinson converted a penalty goal in the 22nd minute to extend Manly's lead to 8-0.

The Warriors hit back three minutes later with a try to second-rower Isaiah Papali'I off a short pass from five-eighth Blake Green.

Green then delivered another short pass for second-rower Tohu Harris to score five minutes later. Johnson converted for a 12-8 lead after 30 minutes. The scores remained that way to half-time.

Manly and the Warriors each completed 16 of 18 sets in the first half with the Warriors enjoying 54 per cent possession to Manly's 46 per cent.

Four minutes after half-time, Warriors half-back Shaun Johnson backed up a break by winger David Fusitu'a to score under the posts in his 150th NRL game.

The Warriors were denied a try in the 58th minute to forward Simon Mannering under the posts after prop James Gavet was penalised for playing the ball sideways.

Johnson then laid on a try to Fusitu'a when he hit a hole to head for the corner before inking up with his winger. Johnson converted the try for a 24-8 lead after 57 minutes.

Fusitu'a then scored two tries in three minutes to extend the Warriors lead to 34-8 after 66 minutes.

Manly scored in the 72nd minute through a determined run to the line by Kelly. Hodkinson converted for a 34-14 scoreline.

The loss leaves Manly on eight competition points heading into next Saturday's clash with St George-Illawarra Dragons at WIN Stadium in Wollongong. 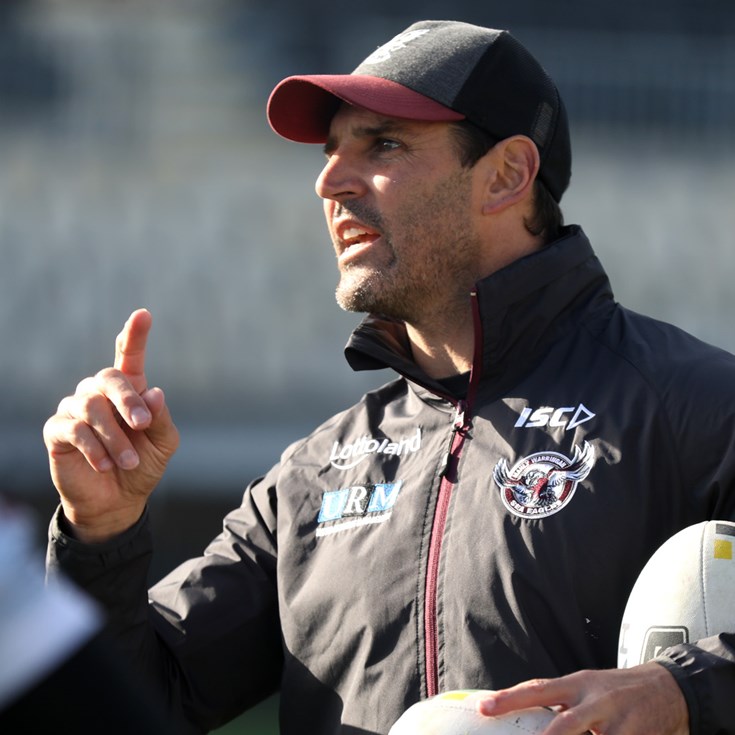