Manly Warringah Sea Eagles suffered an 18-12 loss to Newcastle Knights at Lottoland tonight in round eight of the Telstra Premiership.

The Sea Eagles have now lost their past four matches to remain on four competition points.

To make matters worse, the heavy injury at Manly grew when five-eighth Lachlan Croker left the ground in the 31st minute with a serious knee injury. Scans will determine the full extent of the injury.

In front of a crowd of 5715, Newcastle opened the scoring in the 17th minute when the bunker ruled five-eighth Connor Watson grounded the ball despite a great attempt by opposite number Lachlan Croker in trying to hold him up over the line. Ken Sio failed to convert the try for a 4-0 lead.

The Sea Eagles drew level in the 25th minute when centre Dylan Walker beat winger Nathan Ross to the ball to score from a great kick into open space by hooker Api Koroisau. Half-back and captain Daly Cherry-Evans converted for a 6-4 lead.

The Sea Eagles then lost five-eighth Lachlan Croker with a left knee injury in the 31st minute. He did not return for the game as did winger Matthew Wright (concussion).

A nice short pass from Cherry-Evans saw Lane fall over the line to score in the 43rd minute for a 10-4 lead. Cherry-Evans failed to convert the try.

The Knights then hit back when hooker Slade Griffin scored next to the posts. Sio converted to make it 10-all after 60 minutes.

Five minutes later, the Knights took a 12-10 lead when Sio converted a penalty goal next to the posts after hooker Api Koroisau was penalised for holding too long in a tackle.

Cherry-Evans levelled the scores in the 70th minute with a penalty goal.

The Knights regained the lead when Ponga sent winger Nathan Ross over for a try after the full-back drew in two defenders. Sio converted for an 18-12 lead with three minutes remaining.

It was the Knights' first win at Manly's home ground since 2006.

Manly now play the Sydney Roosters at Allianz Stadium on Sunday, May 6, at 4.10pm. 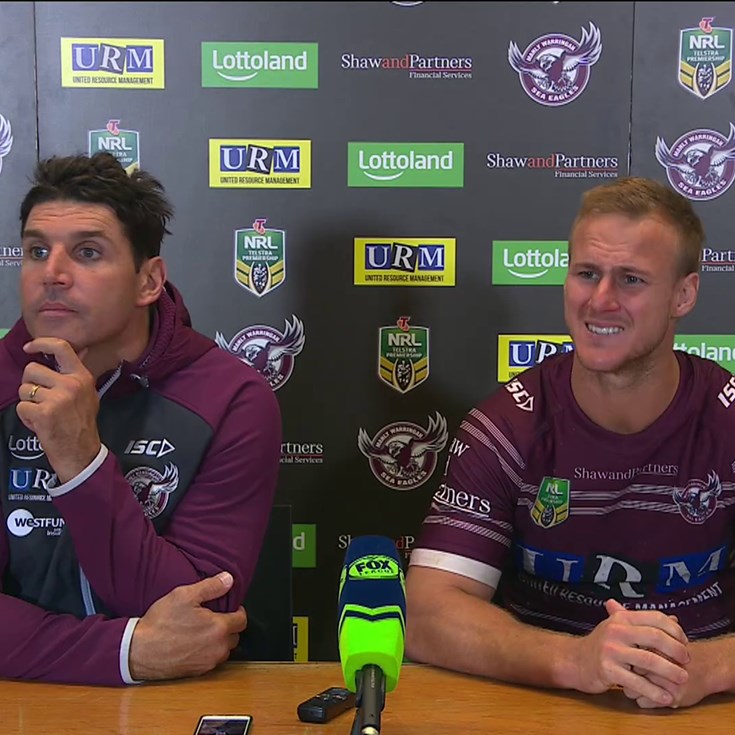 Squad reduced to 19 for Knights clash