'So, here we go again, Manly and Parra.

Parra’s well ahead but the gap starts to narrow.

Manly’s coming back, it seems like they’re built out of steel.

How do you feel’

Whilst these days, you are not allowed to ‘thump ‘em, bump em, pick ‘em up and dump em’ – the lyrics from that iconic ‘Tooheys’ commercial from 1984 - the one thing that lives on is that tremendous rivalry between the Sea Eagles and the Eels.

At Lottoland this Sunday, another chapter will be written about this great rivalry that began when both clubs entered the NSWRL competition in 1947.

Both clubs have gone on to be powerhouses at different times and have fought out three first grand finals against one another. They have also won 12 first grade premierships between them.

The record books show Manly has won 82 of the 137 games played. It would bring a smile to any Sea Eagles fan, as they enjoy nothing more than a win over the Eels. Probably throw in Melbourne, too, now giving that latest rivalry!

A win over the Eels is something Manly fans crave for, and it doesn't matter what grade. A last minute victory over Parramatta in the U20s Holden Cup Grand Final last year brought plenty of joy for Sea Eagles supporters.

That winning feeling is what they will be hoping to experience once again at Lottoland. For some, it is long overdue with Parramatta claiming seven of the past eight matches since 2013.

Manly’s last victory over Parramatta in the NRL came in 2014 with a 22-18 win at home. Current half-back and Sea Eagles captain Daly Cherry-Evans is the only player that remains from that win.

Wearing the number 15 jersey for the Eels that day was current Manly forward Kelepi Tanginoa in what was just his 12th NRL game.

Fortunately for Manly fans, Tanginoa is now a hard-running forward making big inroads in the maroon and white after not getting opportunities at Parramatta’s feeder club, Wentworthville.

And as history has shown, both clubs have regularly swapped and shared players and coaches over the years.

Even the cheergirls now, too. The Eels approached Monique Carroll – founder and boss of the Manly Seabirds - to run their cheersquad. he is again doing both squads.

So, who will claim victory on Sunday and get their first two competition points of the season?

Can Manly get one back on Parramatta in front of hopefully a packed home crowd? Being at Lottoland will certainly help. The Sea Eagles have won 42 of 63 matches against the Eels there.

However on their last three visits to the Northern Beaches, Parramatta has headed back out west with the points.

Sunday is certainly shaping up to be another epic battle between the most-fiercest of rivals?

So, how do you feel? 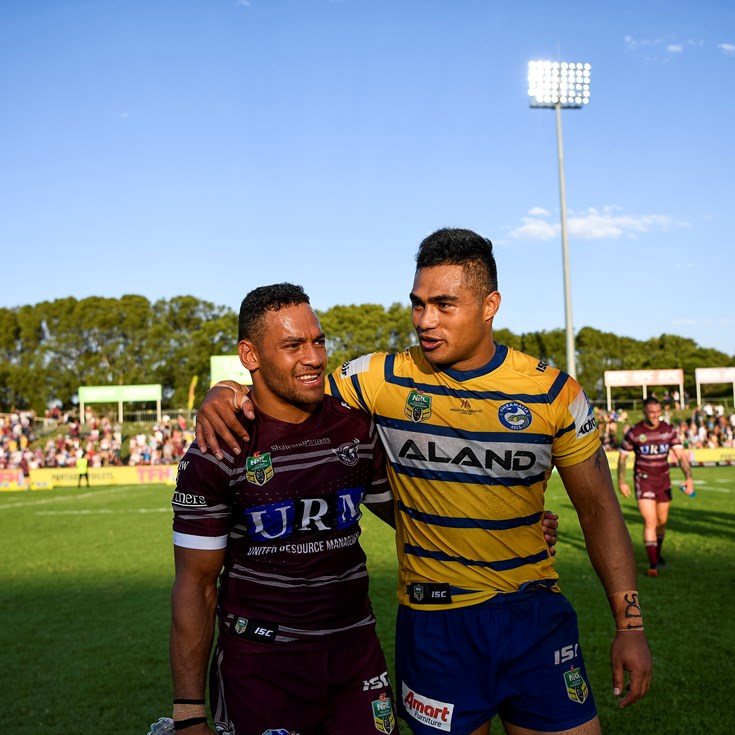 What You May Have Missed... Round 2

Lottoland Legend of the Week (Round 2)

Are You Ready to Defend the 'Fortress'