A three try haul by superstar full-back Tom Trbojevic has led the Manly Warringah Sea Eagles to a 40-22 victory over the Cronulla Sharks at Suncorp Stadium tonight.

Trbojevic grabbed his third hat-trick of the season, and his third in the past four games, as the Sea Eagles ran in seven tries to four.

With the Sea Eagles playing their first Monday night match since July 25, 2016, the match was pushed back a day and was played in front of no crowd as Manly continued their push for a top-four spot on the ladder.

Minutes in, the Sea Eagles went close to shocking the Sharks through almost early tries to wingers Reuben Garrick and Jason Saab.

Manly went over in the 13th minute through Saab in a spectacular diving effort on the right edge. Centre Morgan Harper chased a Daly Cherry-Evans grubber kick which sat up right next to the post but over ran it and was unable to get a hold of it.

With the ball seeming to go out, Saab dived and snatched onto the ball before pushing it back infield and grounding it for the first try. Garrick converted to make the score 6-0.

Four minutes after his first, Saab dived over for his second try, and his 18th for the after, some stunning hold-up play from full-back Tom Trbojevic. Garrick converted from the sideline for a 12-0 lead.

In a matter of minutes, the Sea Eagles found the line again through centre Morgan Harper after another amazing try assist from Trbojevic after he dragged in two defenders. Garrick failed to convert after hitting the post for a 16-0 scoreline.

After a call went against Manly near the halfway line, the Sharks bounced back and scored their first points through fullback William Kennedy in the 22nd minute. Half-back Braydon Trindall converted to make the score 16-6.

After three consecutive sets at the line, the Sharks managed to crack Manly’s defence to score on the brink of half-time after a deflected grubber kick. Trindall scored the try but failed to convert from next to the posts for a 16-10 scoreline at the break.

Trbojevic popped up again with some magic three minutes after half-time to score his 16th try of the season. The fullback combined with hooker Lachlan Croker for a one-two pass before ducking and weaving past defenders before diving over under the posts. Garrick converted to extend the lead to 22-10.

Trbojevic then stepped up again with a superhuman effort 40 metres out from the line for his side’s fifth try.

Looking for space, Trbojevic split two tired forwards, straightened up to burst through the defence before beating his opposing fullback to score his second in the 47th minute. Garrick converted from in front to bring the score to 28-10.

Trbojevic rounded off his already impressive night and crashed over for his third try in eleven minutes.

Off the back of a repeat set, 'Turbo' carried the ball and backed into the line with pace, carrying three defenders on him before falling over the line for his fifth career hat-trick. Garrick converted with ease to make the score 34-10.

After another error from Cronulla, Manly scored through Garrick in the 58th minute on the left edge with the try assist coming from who else but Tom Trbojevic, his third for the night.

Second-rower Josh Schuster was involved in the build-up to the play with one of his signature no-look passes helping to free up 'Turbo'. Garrick was once again successful with his conversion, making his third from the sideline for the night, for a 40-10 scoreline.

Cronulla’s night went from bad to worse, with lock Toby Rudolf being sent to the sin bin in the 66th minute for flopping on and then head-butting Garrick, leading to optimal field position for the Manly side.

Saab was unfortunate not to score his third try with 10 minutes to play after an arching pass to the wing from Daly Cherry-Evans. The Sharks made their way up the field following the mistake from the Eagles and scored through Kennedy. Trindall converted from in front to make the score 40-16.

Cronulla scored back-to-back tries following a break from hooker Blayke Brailey. Following some sloppy defence, Trindall scored and converted his own try to bring the score to 40-22.

After another break in play from the Sharks, Rudolf was joined in the sin bin by Manly prop Taniela Paseka with five minutes to play.

The win also saw the Sea Eagles reclaim the Steve Rogers Memorial Trophy played annually for between the clubs.

The Sea Eagles play competition leaders Melbourne Storm in Round 21 of the NRL Telstra Premiership on Saturday August 7, at 7.35pm, at Suncorp Stadium, Brisbane. 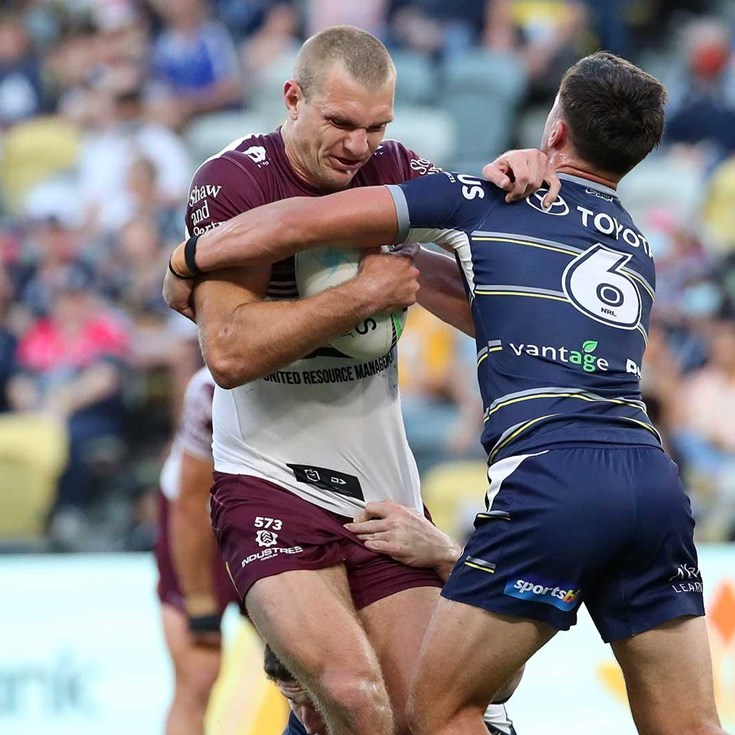