Newcastle are in great shape to record their first back-to-back victories since the opening two rounds of the season against a Sea Eagles side grievously short on troops and luck.

The Knights monstered Wests Tigers 44-4 at home last round and while Kalyn Ponga grabbed the headlines Newcastle turned in a complete team display that should have them pretty confident of a repeat performance on Sunday.

Not only did Newcastle cross for eight tries and restrict Wests Tigers to just the one fortunate four-pointer with enthusiastic defence, they managed to get through the clash unscathed after losing not one but two hookers the previous weekend.

Manly, on the other hand, added starting props Addin Fonua-Blake and Marty Taupau to an already crowded injury ward after falling to 2-5 in their past seven outings, a run that has seen them slide to ninth on the table.

Knights: Newcastle will start 1-17 after Tex Hoy and Brodie Jones were the last two dropped from the squad. Daniel Saifiti will start in his return from a knee injury, with coach Adam O'Brien saying the NSW representative has "earnt the right" to do so.

His comeback will mean brother Jacob reverts to the pine. After having a COVID hold lifted, O'Brien confirmed Star To'a will take his place on the wing.

Chris Randall and Mason Lino were omitted from the extended squad on Saturday. The Knights are chasing back-to-back wins for the first time since Round 2.

Sea Eagles: Jake Trbojevic will start at prop, Corey Wadell at lock and Tevita Funa on the wing after the withdrawal of Martin Taupau (head knock) and Jorge Taufua. Second-rowers Joel Thompson (ankle) and Curtis Sironen (knee) return. Brad Parker is back from a head knock in the centres. Abbas Miski ad Morgan Boyle were the two players left out an hour before the match.

Haumole Olakau'atu drops to the interchange, with Jack Gosiewski also on the bench. The Sea Eagles have defeated four top-eight opponents in 2020.

Mitch Barnett v Jake Trbojevic: The Knights No.13 missed seven games with a neck injury but has provided plenty of energy and enthusiasm in both attack and defence since his return, culminating is a miracle offload to present Hymel Hunt with a try on a platter against Wests Tigers.

Trbojevic has stepped up as one of the few senior Sea Eagles still standing and is in season-best form. He leads the way in defence and provides vital support for skipper Daly Cherry-Evans in the playmaking department.

The Sea Eagles defence will have to show all of its famed resilience if it is to hold back the tide at McDonald Jones Stadium.

The Knights, who lead the NRL in run metres (24,178) and post-contact metres (8583), will send a squadron of hard-running forwards charging at a below-strength Manly pack with Kalyn Ponga (242m against Wests Tigers) primed to take advantage of an equally undermanned Sea Eagles backline. 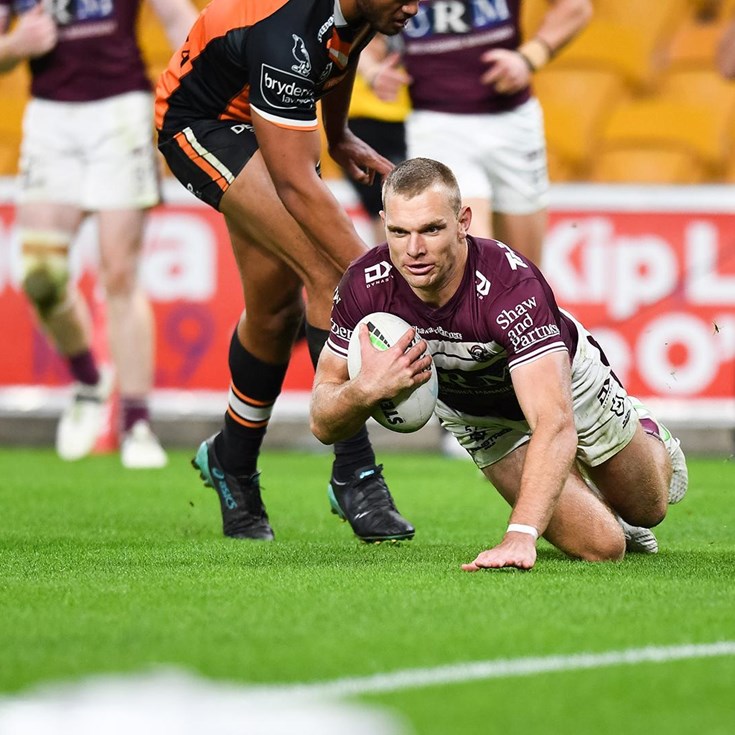