Manly are back to life without Tom Trbojevic (pectoral tear) as they head to Bankwest Stadium to battle the Eels.

Both clubs are finals-bound so there's no immediate squeeze on this result. But the Sea Eagles' progress through September might have a shorter shelf life now that 'Turbo' has had his engines switched off.

Manly won four of the 10 matches Trbojevic missed earlier in the season through two separate hamstring tears, as further evidence of his value to the side.

The Eels would enjoy ironing out a few wrinkles that have caused a minor drop in form. They followed four straight wins with back-to-back losses to the Bulldogs and Broncos over the past fortnight.

Eels: Marata Niukore drops back to the bench with Daniel Alvaro named in his place at lock but otherwise Parramatta's line-up is 1-17 for kick-off. Tepai Moeroa and Ray Stone replace David Gower and Peni Terepo on the bench. Will Smith and Terepo dropped off the reserves list 24 hours before kick-off. The Eels have won seven of their past nine games against the Sea Eagles.

Sea Eagles: Taniela Paseka has been elevated to the starting side with Corey Waddell dropping back to the bench but otherwise Manly's line-up is also 1-17. Brendan Elliot starts at fullback with superstar Tom Trbojevic gone for the remainder of the campaign following surgery on a ruptured pectoral. Tevita Funa and Cade Cust were trimmed from the extended bench on Thursday. The Sea Eagles have only won one of their past five games without Trbojevic's services in the No.1 jersey.

The way opposing halfbacks Daly Cherry-Evans (Sea Eagles) and Mitch Moses (Eels) choose to end their sets will be a feature of this game. The Eels failed to complete 11 of their 38 sets in the loss to the Broncos and the Manly didn't finish off 10 of their 31 sets going down to Storm. Both these No.7s pride themselves on not only controlling their game plans, but getting to their kicks. So whoever impresses more on the fifth tackle options will go a long way to securing a win. They are also in top-three in the NRL for try assists this year.

For the Eels to win

Getting the back five back to ignite more often. Both centre Michael Jennings and winger Blake Ferguson have been out injured recently, which has disrupted the flow a little. Jennings and Maika Sivo are a powerful combination but Ferguson and mid-season Penrith recruit Waqa Blake could be equally as dangerous - they just need time. Last week was their first game together.

Cherry-Evans, his two hookers in Api Koroisau and Manase Fainu, and five-eighth Dylan Walker have to make sure they continue to keep the attack flowing without Trbojevic. Engaging the ball-playing skills of the other Trbojevic brother, Jake, will go a long way towards that. TT's likely replacement Brendan Elliot also knows the drill as he's played 11 of his 15 games this year at No.1. So he won't need a lot of tutoring from Cherry-Evans - he just needs to pick up where he left off the last time Turbo was absent.

The great old rivalry is back again. The unfortunate thing for Manly is that Tom Trbojevic is gone. His absence takes so much away from the team and will put a lot of pressure on DCE to be the main creator in attack outside of the forwards. Blake Ferguson’s return was a huge in for Parramatta last week. They want to get on a winning note before the finals and I think Brad Arthur will have them absolutely primed for this. Eels by 2

Cherry-Evans leads the NRL in 40/20s and he loves to turn the momentum of a game by catching the opposition off guard.

Former Roosters and Fiji international prop Kane Evans is looking to celebrate his 100th NRL game by playing in Eels colours. He's run over 110 metres per game for the past four weeks so another effort like that will warrant popping a champagne cork or two. 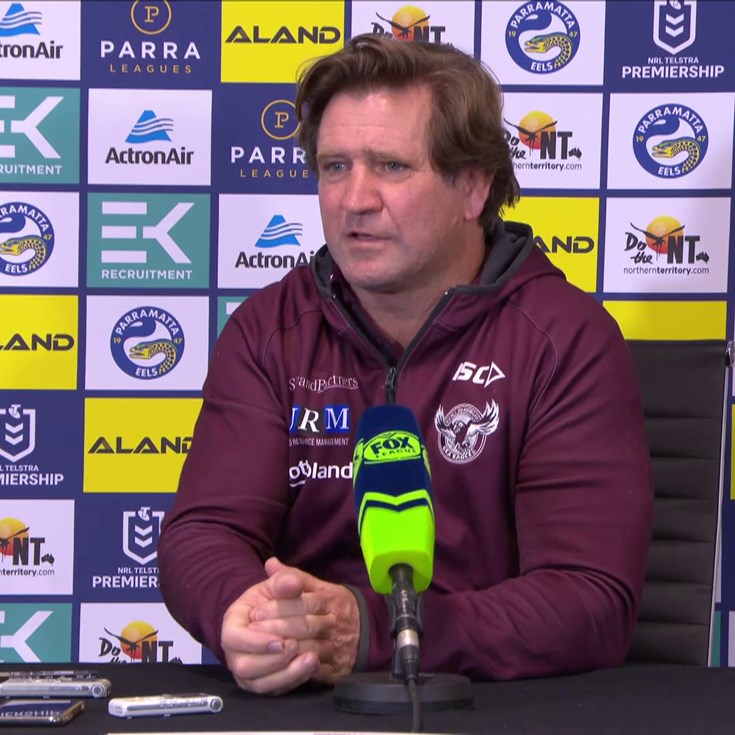 How Men of League helped Sironen through dark days

Return of Trbojevic key for Sea Eagles against Eels