Robbie Farah and Benji Marshall turned the clock back to spark Wests Tigers to a 20-6 win over Manly at Leichhardt Oval in Michael Maguire’s first game in charge of the club.

Farah, who was playing just his second match at the iconic ground since believing his career with the club was over as he sat on the Leichhardt Oval scoreboard after his farewell appearance in 2016, scored two tries in a dominant second-half Tigers performance.

Marshall, who captained the Tigers in the absence of injured fullback Moses Mbye, laid on the other try for former Sea Eagles lower-grader Luke Garner and was a calming influence on his team after a tryless first half.

The last members of the Tigers 2005 premiership winning team still playing in the NRL, Marshall and Farah were re-united at the club late last season after four years apart and played the final nine rounds together.

The match was the first for Wests Tigers under Maguire and also marked the return of two-times premiership winning coach Des Hasler to Manly after he quit the club to join Canterbury in 2012.

Hasler’s previous match in charge of the Sea Eagles was their 2011 grand final triumph over the Warriors and his influence was immediately obvious as the team with last season’s worst defensive record held the Tigers scoreless in the first half.

While Manly only led 2-0 at halftime, they created a number of tryscoring opportunities and former Tigers forward Curtis Sironen – the son of Balmain great Paul Sironen – was denied in bizarre circumstances when referee Adam Gee impeded Corey Thompson.

Sironen thought he had scored in his first match at Leichhardt for the Sea Eagles after Tigers winger Robert Jennings had put down a Daly Cherry-Evans kick and Jake Trbojevic toed the ball ahead but Gee blocked Thompson’s path.

Manly prop Addin Fonua-Blake was penalised for a torpedo tackle on Marshall after a kick early in the match and found himself in trouble later in the first half for a cannonball tackle on Russell Packer.

Stand-in Sea Eagles fullback Brendan Elliott had to overcome his own demons later in the first half as he bombed a certain try by ignoring an unmarked Brad Parker outside him.

Elliott then knocked on near halfway from a Tigers kick in the next set of tackles but Manly’s defence continued to repel their opposition and the only points of the first half were a 27nd minute Cherry-Evans penalty goal.

Tigers centre Esan Marsters levelled the scores with a 45th minute penalty goal after Jack Gosiewski tackled Thompson off the ball and they were given a further scoring opportunity after Sea Eagles winger Rueben Garrick kicked out on the full from the re-start.

With the 13,159 crowd willing them on, the Tigers began to get on top and the Sea Eagles defensive line finally broke in the 48th minute when Farah pounced on a Brooks grubber which ricocheted off Sironen’s knee.

Marshall put second-rower Garner over 10 minutes later to extend the Tigers lead to 14-2 and Farah then sealed the win in the 66th minute when he raced out of dummy half and ran 10 metres to score before Taufua grabbed a consolation try on full-time. 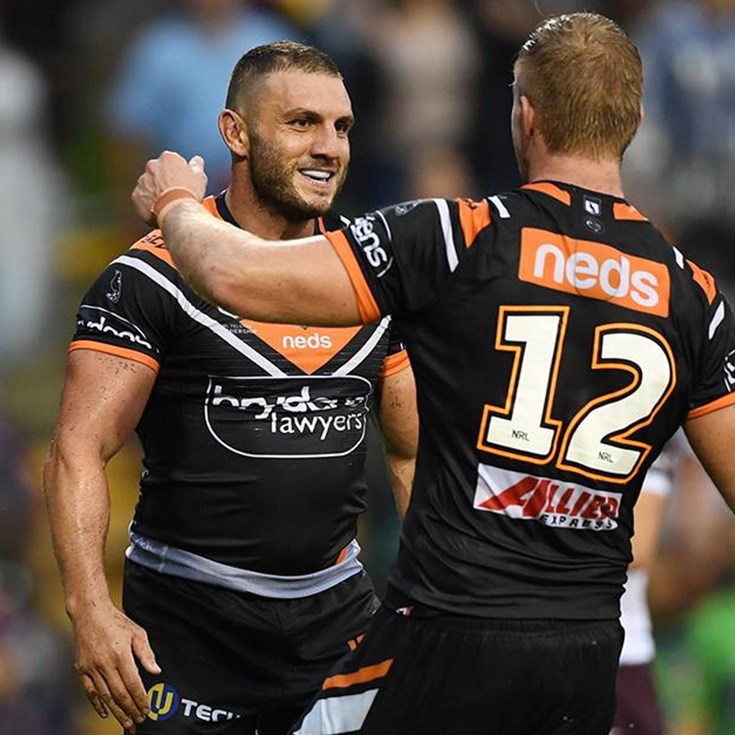