Both Manly and Canterbury have been out the top-eight race for a number of rounds, but both are doing their utmost to avoid 'winning' the wooden spoon by toppling finals-bound sides last week.

The hosts showed their trademark grit to beat Cronulla in golden point while the Bulldogs thrashed the Broncos in their best performance of 2018.

Canterbury have actually claimed back-to-back wins for the first time this season, having defeated Wests Tigers in round 20, and will be chasing a rare three-game winning streak against a rejuvenated Sea Eagles outfit.

Key match-up: Dylan Walker v Lachlan Lewis. The Manly pivot has endured an injury-plagued campaign, with Lewis impressing in his first season in the NRL. With Kieran Foran out for the year with a toe injury, he has filled the void in the halves for the Bulldogs with aplomb.

For the Sea Eagles to win: Give the ball to Shaun Lane. The back-rower bagged a double against the Sharks, making him Manly's leading tryscorer this season with eight. The Trbojevic brothers, Tom and Jake, both have four to their name.

For the Bulldogs to win: More of the same. The Belmore boys are striving for three wins on the trot, and watch for fullback Will Hopoate to dominate where it all began as a standout junior on Sydney's northern beaches.

Sea Eagles Stat Attack: Marty Taupau (63) is king of the offloads, leading the way ahead of Sharks enforcer Andrew Fifita (61). Lock Jake Trbojevic (30) is the most penalised player in the competition.

Bulldogs Stat Attack: Despite sitting in 13th spot, Dean Pay's men boast the equal best set completion rate (79%) alongside the Knights, Tigers and Broncos. Canterbury also have the most post contact metres (10,540) and runs (3522) in the NRL.

And another thing: Both teams have the same win-loss record (6-14) in 2018, well below what both squads would have predicted in pre-season. With pride on the line but no finals, this should be a high-scoring affair.

Sea Eagles: Coach Trent Barrett has made one alteration to his original squad named on Tuesday, moving Frank Winterstein to the interchange bench in place of Jack Gosiewski. Matt Wright and Toafofoa Sipley were cut an hour before kick-off, while Tom Wright was omitted on Friday.

Bulldogs: Matt Frawley comes into the starting team for Lachlan Lewis, while Greg Eastwood comes onto the bench with Chris Smith dropping out. Jeremy Marshall-King returns at halfback. David Klemmer returns from suspension, pushing Danny Fualalo to the bench. John Olive was cut an hour before kick-off and Renouf Toomaga was omitted on Friday night.

Petero Civoniceva's prediction: I have to give the Bulldogs a big rap for the way they played against Brisbane. It would have been easy for them to turn it up but they have dug deep in recent weeks. You could say the same about Manly as well after their gutsy win over the Sharks. Should be a tight contest and both sides will be confident coming off victories but Manly can win at home. 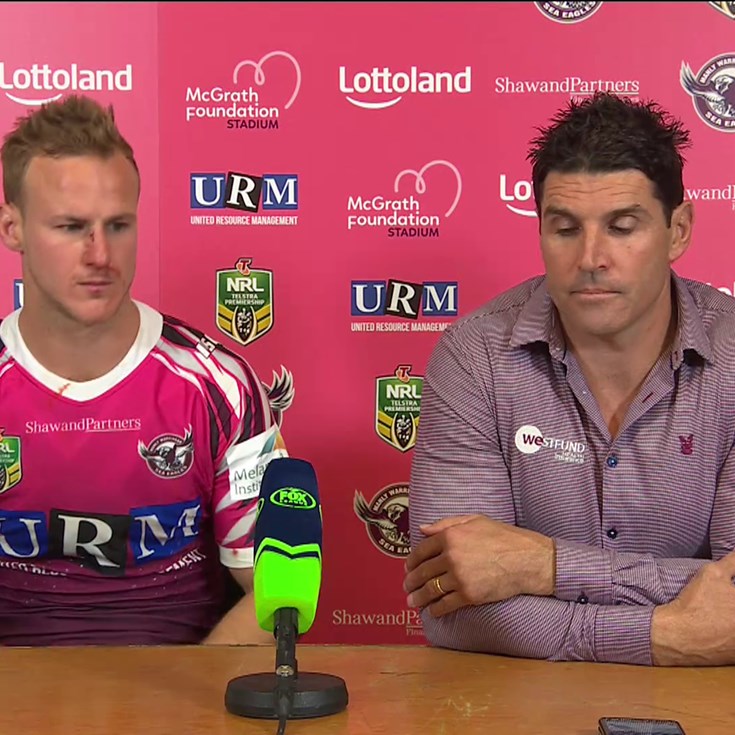