This story was first published on NRL.Com

After the kind of off-season no young footballer should ever have to go through, Manly recruit Apisai Koroisau is hoping a reconstructed shoulder won't stop him from suiting up for his new team in Round 1.

Koroisau not only had to undergo a shoulder reconstruction that ruled him out of a chunk of off-season training at his new club and any chance of playing any trial matches, he tragically lost his partner as well.

Following that he was involved in an incident that was flagged with the NRL's Integrity Unit, with the club noting the "extenuating circumstances" in his personal life.

Despite his recent hardships the popular 23-year-old bravely fronted up to a club open media session at the club's Narrabeen training base, where he told NRL.com that off-field troubles aside he had found Manly a very enjoyable club to be a part of.

"It's been different coming into a team with 16 new boys but we've gelled incredibly tight in a short amount of time. I'm loving it out here and the lifestyle's great," he said.

"They (the club) have been amazing the way they've supported me through all the stuff that's gone down now so hopefully that will be all sorted.

"Definitely [hoping to use footy to get past it]. With injuries I won't be playing any trials so I'm just trying to get back out there on the field and do what I do."

Koroisau also praised new Manly coach Trent Barrett – who he spent some time working with last season at Penrith – for helping him through a rough patch as well as being clear about what he wants in an on-field sense as well.

"He's been excellent. He's told me what he wanted from day one. I've been looking to try and impress him as he is the new coach and he's just been helpful regarding all the other off field issues as well so he's been impressive," Koroisau said.

Despite his injury and a lack of opportunities to impress in trial matches, Koroisau is hoping to be fit for the club's season opener against the Bulldogs at Brookvale Oval on Friday March 4. He also knows he can't afford to let fellow new recruit and No.9 Matt Parcell get too much of a jump on him.

"I had a shoulder reco late in the off season and I'm just sort of managing that now but it should be good to go by Round 1. I'm doing all I can, been working hard in rehab and got a good team behind me so we'll see come Round 1 but I'm pretty confident," Koroisau said of the injury.

"Definitely, the starting spot is up for grabs. Two young players here and a lot of competition. I think you really need that coming into a side, it pushes everyone to be better and that's spot's up for grabs so we're both hanging for it.

"It's just about being real diligent now with my shoulder, doing all my rehab and the extras I need to do and getting it 100 per cent before Round 1."

Koroisau said there was no reason the new-look squad can't return the Sea Eagles to the realm of competition heavyweights after they missed the finals last year for the first time in a decade.

"The vibe around the place is definitely very high. It's been really good, especially with such a new team," he said.

"The recruitment job done in the off season is really impressive and we're really looking forward to it. There might be some expectations there but I think the boys will stand up." 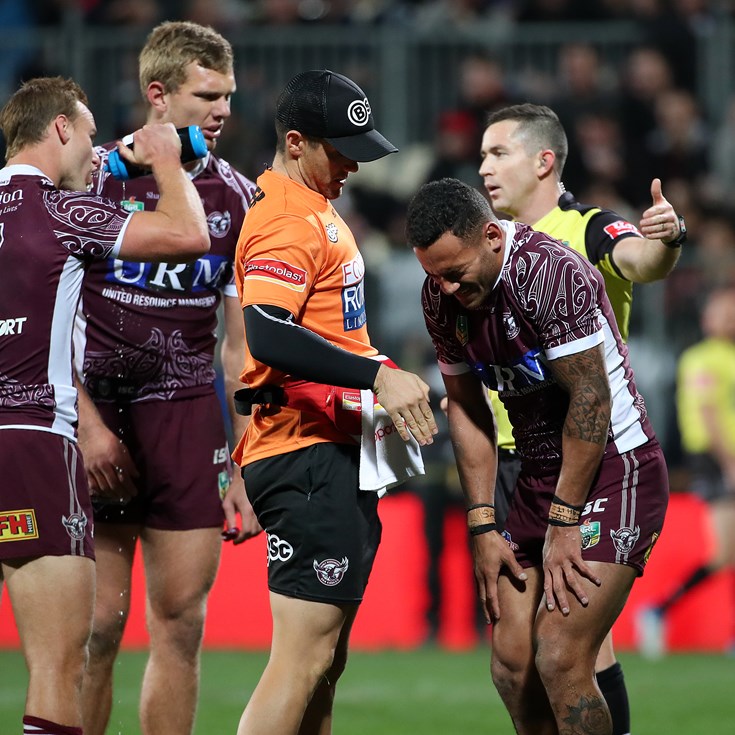