A big second half comeback from the men in maroon and white has sent the Parramatta Eels packing from Brookvale Oval in the last trial before the NRL season kicks off.

With some notable former players and staff in attendance, the match had a little more than your normal trial riding on it.

It turned out to be the classic tale of two halves, with both Brad Arthur and Geoff Toovey sending out the players fighting for spots in their round one team for the first half.

The game didn’t start well for the Sea Eagles with a knock on from the kick off meaning the ball was gifted back to the Eels from the drop off.

Both sides traded defensive blows before Ken Sio broke through out wide after some impressive attacking work from Nathan Peats and Luke Kelly.

It was Mark O’Dare’s time to shine only two minutes later when he darted over out wide, for his first ever try in Sea Eagles colours to level the scores.

The match continued to entertain with the physicality in the forwards impressive, but the Sea Eagles were again made to pay for some sloppy mistakes through consecutive tries to Ryan Morgan and Ben Smith.

John Folau eased over just before the break to take the lead out to 20-4, with conversion misses the only thing keeping the Sea Eagles from being completely out of reach.

Both sides sent on the big guns for the second half, with former Sea Eagles favourite Will Hopoate lining up in the blue and gold for the first time.

He was straight in to the action, gifting the last pass to Vai Toutai who score in the corner with his first touch of the ball.

Down by 20, the Sea Eagles began to step it up a gear in attack. Brenton Lawrence was charging hard and fast at the line, with Anthony Watmough fighting for every metre at every carry.

The forward momentum laid the platform for Manly’s slick backline to go over for back-to-back tries to Jorge Taufua.

He was almost in for his hat-trick soon after but play was called back for a forward pass that could prove even more costly, with the speedster coming up clutching his shoulder.

Despite Taufua going off, the momentum stayed with Manly and a great offload on the line saw Matt Ballin duck over next to the posts for his first of the evening and bring the deficit back to four.

The Eels had a number of breaks at the back of the game through Semi Radadra, but was thwarted both times by the ever reliable Brett Stewart.

The comeback was complete with four minutes remaining, with new recruit Jayden Hodges crossing over for his first try in a Manly jersey.

The result leaves both teams with one win and one loss in the trials, with Manly to face the Storm in their Back to Brookie clash on March 8. 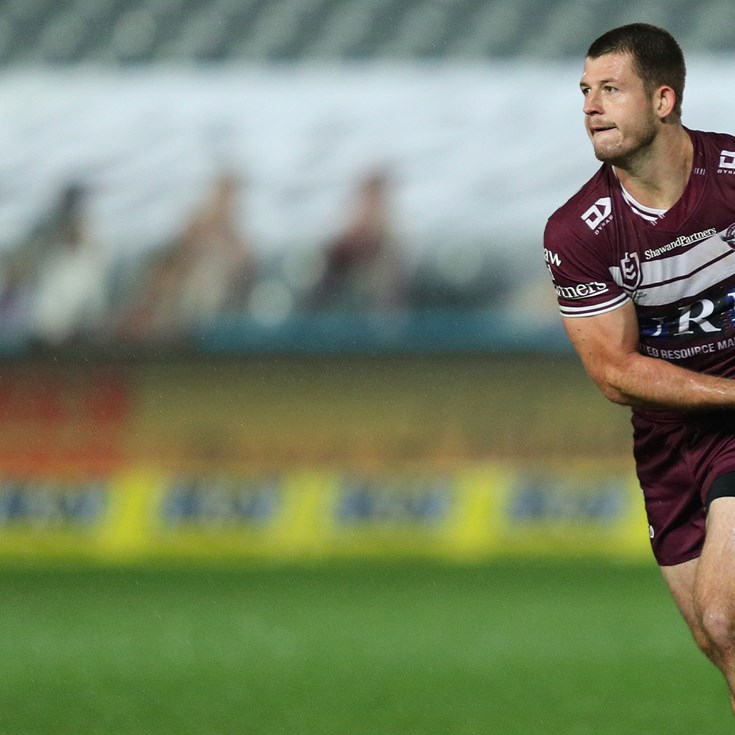 Cust: Taking everything in

Funa: Each individual will step up

Sironen: Focus is on defence